I'm currently marinising a pair of Cummins for my charter boat and making a series of videos
of the process on YouTube.
I will be making some videos of the up coming work on Teal and her re-engine also.
So if you enjoyed the story so far please click the link below and like and follow my channel and help it along.
I'm also have a new facebook page for a little Winter business I'm trying to get going
called West Cork Restorations which will follow Teal and other projects so if your on there maybe give that a like too if you please.

Teal is currently waiting and looking unloved for a tow home but she will be getting a serious
refresh soon. Thank you!!

Update for this season

So its pretty much set now that Teal won't go afloat this year. I have yet to do anything about the engine so my main goal now is to sort out a tractor and tow her home.
Once that much is taken care of  I will have to make a new entrance into my shed to fit her in.
The plan from there is to do a serious freshen up which includes
- replacing the engine
- recovering the deck
- some interior changes and finishing off
and a whole lot of painting and varnishing. This should all be much more manageable when shes inside and I can walk out the door and do a bit whenever it suits.The most nerve racking part will be the 14 mile tow home. It pains me a bit to take her away from the sea but I really think this season will have slipped by before much gets done if she stays where she is.
Posted by Adrian at 15:09 No comments:

At last she is all derigged, on her own trailer, cleaned out and covered up for the Winter.
I have the engine partly striped down and hope to have the whole thing out shortly. We're not sure if we will tow her home this year or not as I have a bit more work to do on the trailer and the shed I want to put her in needs work as well but either way she is not too badly off now. 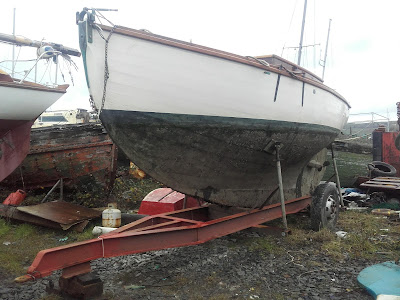 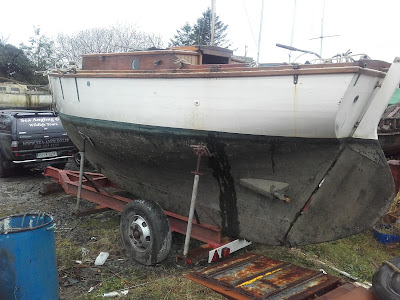 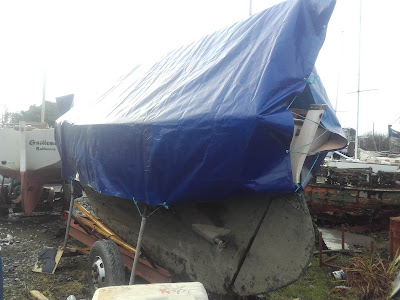 I got a few phone calls last week putting the pressure on to get the trailer built so I put in a hard week to get it done. I tacked it all together in my shed but I don't have a heavy enough power supply in there to use the bigger welder I borrowed to do the big welds, so had to move it for the final welding , I used 7018 low hydrogen rods which were recommended to me.
The beams are 16' long 8"x 4" RSJ's with 6.5ft 6" channel irons running across, The uprights are 2inch galvanised pipe with Screw jacks to tighten up to the hull, The axle is a front lorry axle off an old Hino. I bought a weld on tow eye for the tow bar. The ballast sits on the axle and the 9" block of wood forward of it to keep her level.
Nothing went easy, I searched the boatyard for wheels to fit the axle they had given me but only found one. A local tire center happened to have another one to suit following a long wait. Next I spent 6 hours in the rain trying to free the brake drums on the axle up (murder) and ended up sick. Next the trip switch in my other shed wasn't big enough for the welder so had to go and replace that and then go by a pin type towbar for my jeep to tow it to the boatyard. Regardless it got there and on time, where it sat for the last week.
I went to lift the boat yesterday but it didn't happen but today it did. We got the mast down and lifted the boat on to the trailer. I then had to weld on all the struts to hold her up. Of course my welder instantly packed up but they lend me another one. It was dark at that stage so couldn't get a picture but she looks tidy on the trailer and fits nicely as I had planned. They moved her out of the way on it so it also works :) I don't want to make one that heavy again !! 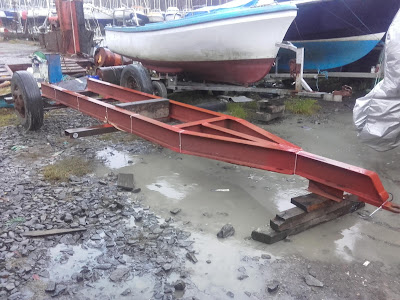 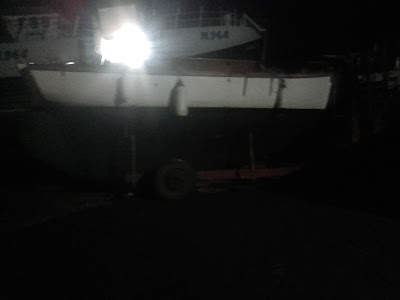 This is a picture I found online of Teals sister ship Water Wraith, Built from the same moulds but with a counterstern, I wonder if the counterstern and bermudan main were a later addition. 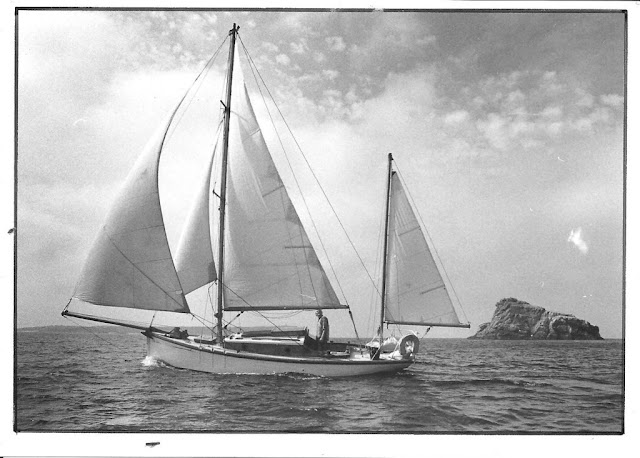 I finally got the trailer mocked up today. It shouldn't take long to get it all welded up.
We went to change Teals head gasket during September but one of the head studs had seized into the head and we failed to get the head off. We have decided to scrap the Petter engine and get something more powerful now. We were going to sail up the river when wind and tide suited but as it happened the time had come for me to put away the charter boat so I picked Teal up on the way and we towed her up to the boatyard where she is waiting to be lifted. Hopefully straight on to the trailer.
Sorry my phone camera is rubbish. 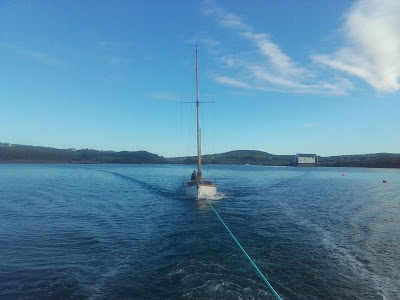 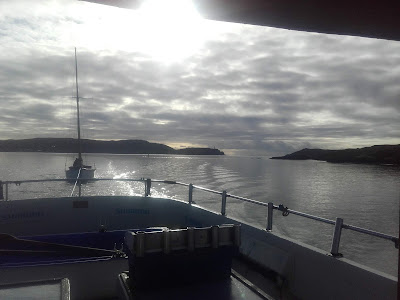 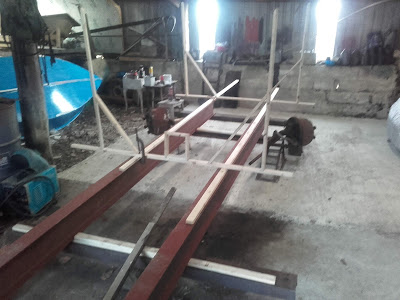 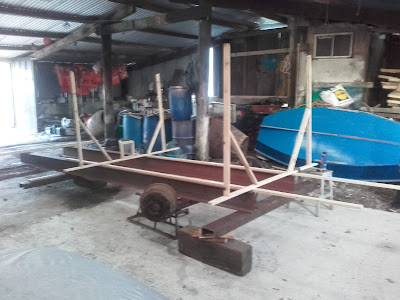 Well this was an interesting week, I was on a shark fishing charter for the day on Monday and meeting family and friends on Cape Clear on Monday night for a few days R&R. So after a long haul back in I headed off to Baltimore to get on board Teal and motor/sail to Cape.
It was a westerly force 3/4 and I was on my own so I planned to just put up the main to help her along and motor out the 7nm to North harbour.
About 4nm and out in the chop in Roaringwaterbay I notice she was getting quite smokey. At first I thought she might be working a little harder than she had been and was burning off some of the oil used in the plungers to start her in cold weather but as we proceeded it was becoming apparent that another head-gasket had failed.
She started to splutter soon after and seemed like it might cut out. I gave Ken, who was already on Cape to have a look around for anyone with a RIB or similar to maybe bring him out so we could sail or at least stand by me in case she died.
It was nearly 9pm with a headwind and the relatively strong tide soon to go against the wind so I didn't fancy my chances at sailing her single handed the rest of the way or making to any safe-haven downwind before dark.
When that failed I put in a call to the coastguard to maybe have the Schull ILB stand by me.
Straight any they tasked the Baltimore all weather lifeboat which was on exercise just around the corner. A little overkill but I was happy to have the company.
As it happened we plodded away under our own steam for the last 2 miles or so. The engine did indeed die out when I throttled it back out side the harbour and at first refused to restart. It eventually did and motored right in alongside the pontoon 'escorted by a massive lifeboat and its inflatable sidekick". Its one way to enter a quite little harbour late in the evening with the pub clientele looking on.
Now we are on facebook and the front page of this weeks paper. Slightly making a mountain out of a molehill but I know the more publicity the better for a great organisation who we are lucky to have and I was glad to see !


As for the rest of the trip, that was great, I opted to send my wife and kids back on the ferry and Ken and myself had a brilliant sail in beautiful weather with Teal at her best all the way back and on to the mooring. I was happy to leave very pleased with her, Great boat "stupid engine".

Gaskets are on the way to finish out the season and then the Petter will probably go over the side..... 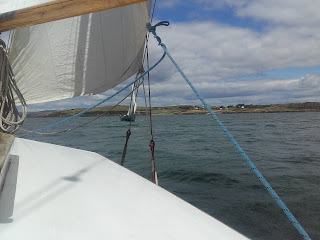 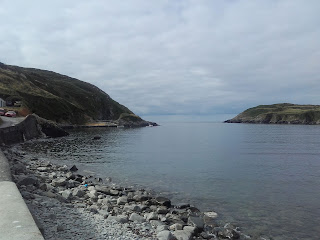 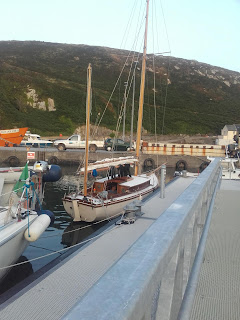 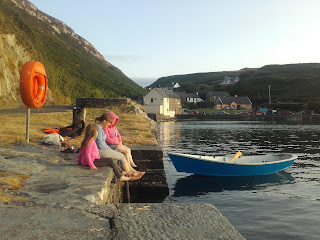 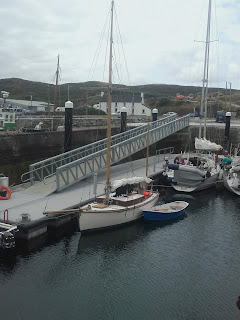 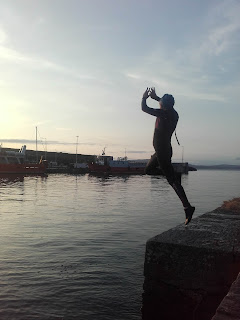 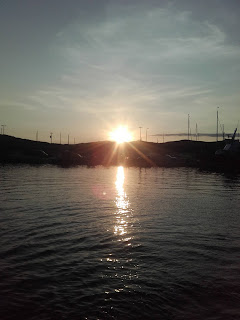 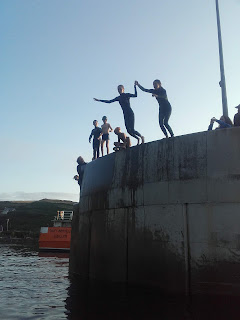 Adrian
We bought Teal in late 2011 and over the course of 2 and a half years have done an extensive restoration. She was relaunched on the 13/05/14 as we are now sailing her from Glandore harbour in West Cork. We have kept her as original as possible and have used only traditional materials as much as possible, She is plywood free and epoxy free bar a few glue joints. I am a carpenter/joiner by trade but have been messing with boats most of my life although this is my first timber built one. I had originally planned on going into boat building after school but like many, I was drawn in with the masses to the booming building trade. So I'm now getting to enjoy learning the skills of traditional boat building. Although the work on a boat never ends and I have continued to blog the day to day bits and pieces and our travels, all the major work was done before May 2014 so if its the restoration you are interested in it all there, its fairly comprehensive.